Four ocean loving students from TCAS recently represented Kākā Point in the Junior Surf Life Saving Championships in Christchurch. We are so proud of their achievements!

This year Lola and Rocco Povey, and Liv and Hollie Harrex, competed at a number of local carnivals as well as Otago/Southland Champs. On the 12th of February they headed to New Brighton to compete in the Junior (Nipper) Competitions. Liv, Rocco, Hollie and Lola represented their district with pride, displaying great attitudes and sportsmanship.  Their results are phenomenal and they should be incredibly proud of their achievements.

Rocco placed 4th in South Island Flags and top 10 in the Sea Events.

Hollie placed 2nd overall for her age category within the South Island.

Lola placed 3rd overall for her age category within the South Islands.

Lola and Hollie both achieved 1st place in flags at the South Island Champs.

All the students have been a part of the Kākā Point Surf Life Saving Club for a few years. The surf lifesaving season lasts around 5 months, however the kids train all year round. They do a variety of sport within surf lifesaving like sprinting, long distance running, sea swimming, board racing and flags. They compete individually and also as a team. A lot of dedication, hard work and practice goes into the season,  so well done! 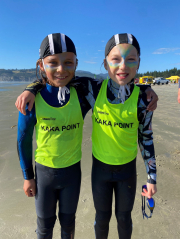 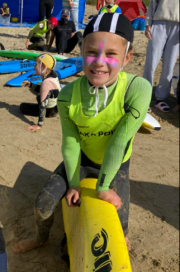 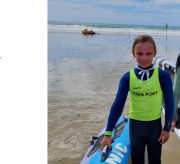