Achievement was the focus for the first assembly back of the term.

It was a brief affair, but a fantastic way to see all of TCAS ākonga together refreshed and ready to tackle one of the busiest calendar terms of the year.

The ākonga are becoming accustomed to singing our National Anthem at the beginning of each assembly and it's fabulous to see we can even attempt it acapella.

The focus value was announced at assembly as Achievement. Quickly it became an interactive assembly with ākonga thinking and sharing what achievement could look like and how it can be demonstrated both personally and as a collective kura. With the NCEA examinations due to start in a couple of weeks, it became a reminder how we can focus on achievement academically.  The first draw for achievement cards will be in the Week 3 assembly on the 1st of November.

There are 4 more assembly's scheduled for the Term 4. Parents, caregivers, grandparents, whānau and the wider community are invited to join in our celebrations together. Assembly is on a Tuesday at 9am in the gym on 1st November, 15th November, 29th November and the 13th December (Prizegiving practice included). It would be fantastic to see you all there! 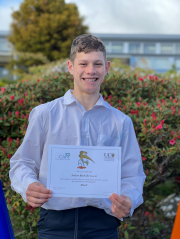